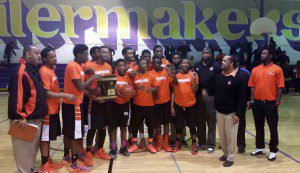 A rough fourth quarter brought about an end to the Leo Lions’ 2013-14 basketball season on Friday, March 7.

The Lions went scoreless for more than five minutes, missed five of six free throws and committed six turnovers in the final eight minutes of their Class 2A Sectional championship game against Hales at Robeson High School. The Spartans rallied for a 68-57 victory, hitting 16 of 21 free throws while outscoring Leo 25-11 in the final period.

One key for the Spartans was holding the Lions’ Darius Branch to two points in the second half and 11 for the game after he had scored 28 in Leo’s sectional semifinal win over Carver. Still, Branch enjoyed an exceptional sophomore campaign, finishing as the Catholic League’s No. 3 scorer with 18 points per game and making the All-Catholic League
team.

“It was there for us, but we made too many mistakes in the fourth quarter,” coach Noah Cannon said. “It’s disappointing, especially for the seniors. But I’m not going to complain about the season we had.”

Nor should he. It can be argued that Lions improved by 500 percent, finishing with a 15-14 record after winning just three games last season. And with six players returning from coach Cannon’s eight-man rotation, including all five starters, Leo basketball has a bright future.