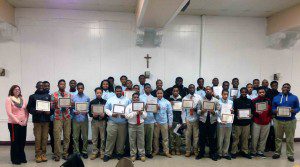 More than 20 percent of the student body at Leo High School were recognized for their academic achievements during the first semester of the 2013-2014 school year on Thursday, Jan. 23, 2014 in the school’s auditorium.

The junior class bronze honor roll students are Raheem Williams, Latrell Giles and Alexander Green. Dexter Dale, Jr and Isaiah Nichols were the tops in the gold division of the junior class.