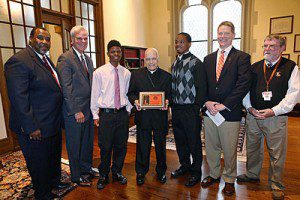 Cardinal Francis George was inducted into the Leo High School Hall of Fame during a ceremony in his office at the Archdiocesan Pastoral Center on Thursday, May 22.

The Leo Alumni Association voted the Cardinal into the Hall as a member of the Class of 2014, but he was unable to join his fellow inductees at the Alumni Banquet on April 25. So arrangements were made to honor him a month later.

Cardinal George was honored for his strong support of Leo. In 2013 he served as Honorary Chairman of the Lions Express to Opportunity campaign to obtain two new buses to enhance the school’s transportation capabilities. The Cardinal then officiated at a “blessing of the buses” ceremony after the vehicles were purchased.

“I’m very grateful for this honor,” Cardinal George said. “I have great respect for the Leo Mission, and I’ve been impressed with the young men I’ve met on my visits to Leo. I will continue to pray for the school’s success.”