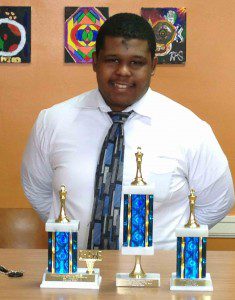 Junior Dexter Dale collected three trophies at the Chicagoland Chess Conference awards ceremony in February. Dexter was the first-place finisher at the season-opening kickoff tournament, and again at the Hales Invitational. He placed 15th in state competition, the best showing by a Leo competitor since Leo restored its chess program eight years ago.

In addition to being Leo’s No. 1 chess player, Dexter is the top-ranked student in the junior class with a 3.67 GPA and is a two-year starter on the varsity baseball team.